Know More About the Amazing ‘New Seven Wonders of the World’

The new seven wonders of the world was an initiative began in the year 2000 for selecting the seven greatest monuments ever built. Over 200 monuments competed to be named in the top seven. After collecting the votes from 100 million people around the world, the final list of seven great structures was announced on 2007. The following sections provide a detailed descriptions of each of them.

1. The Great Wall of China, China:
The Great Wall of China was built in many phases from the 7th century B.C. to protect the Chinese from the Mongols. The major part of the existing wall was built by the Ming Dynasty. Built of stone, tamped earth, brick, wood, etc, the wall is built along the east-west line along northern border of China. Spanning over 4,000 meters, it is the longest man made structure on the planet.

2. Petra, Jordan:
The archaeological city of Petra in Jordan was the capital city of the Nabataeans who thrived between 9 B.C. and 40 A.D. The city is praised for its rose colored architectures cut from rock and the excellent water management system through water chambers and intricate tunnels. Among the hundreds of structures of Petra, the 4,000 seat amphitheater is most popular among tourists. Over the years, this city has become the symbol of Jordan. 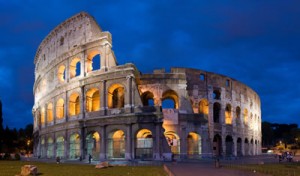 For centuries, the Colosseum stood as a living example of the greatness of the Romans. Thought to be built between 70 and 80 A.D., this elliptical structure which can house more than 50,000 spectators at once, was used for nearly 500 years. The ancient Romans gathered here to watch gladiatorial events, public spectacles, and battle reenactments. Although some part of the structure was ruined by stone robbers and earthquakes, the Colosseum is still open to tourists.

4. Chichen Itza, Mexico:
The brilliance of the Mayan civilization can be witnessed by observing the ruins of Chichen Itza city. Once a center for trading cloth, honey, salt and slaves, the city thrived between 800 – 1200 A.D. during which it was the economic and political hub of the Mayans. One of the famous sites in Chichen Itza is the El Caracol, the astronomical observatory noted for its sophistication.

5. Machu Picchu, Peru:
Machu Picchu, a city built by the Inca civilization in 15th century, is filled with awe-inspiring buildings built of sparkling granite stones. It lies in a breath-taking location between two peaks of the Andes. It was believed to have served as an estate or an archaeological site for the Incans. For almost four centuries, the site remained unknown till it was re-discovered by Hiram Bingham in 1911. Tourists can reach it only by foot, train or helicopter. Train services run between Machu Picchu and Cusco.

6. Taj Mahal, India:
Taj Mahal is a mausoleum built by a Mughal emperor Shah Jahan in memory of his wife. Built between 1632 and 1648, it is considered to be an excellent specimen of Islamic architecture in India. It was built entirely using marble stone with several architectural influences from the Turkish, Persian and Indian styles. Taj Mahal’s beauty is said to increase manifold on the night of full moon.

7. Christ the Redeemer statue, Brazil:
Christ the Redeemer statue, the world’s largest Art Deco styled statue of Jesus Christ (till 2010), has become a national icon for Brazil since its erection in 1931. It is 30 meters tall and is made of soapstone and concrete. The magnificent structure stands on the Corcovado mountain and depicts Christ in his eternally blessing state. Most of the $250,000 spent for its construction was collected through donations.

So, what are you waiting for? Learn more about the details of any of the above spot from any travel guide website and start a journey of a lifetime.

Read more about the New 7 Wonders of the World: http://en.wikipedia.org/wiki/New7Wonders_of_the_World

Copyright © 2022 Your Name. All rights reserved.